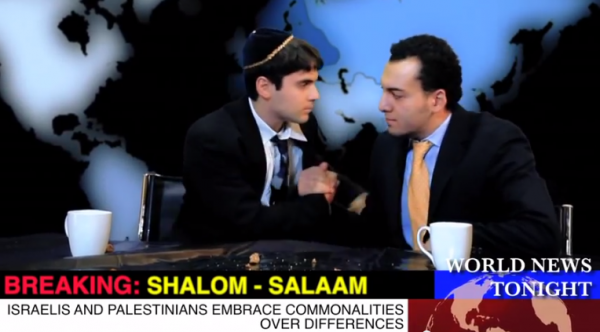 The impact of media on peoples thinking and behavior can’t be underestimated. Ben Sheehan wrote a funny piece on that issue. He states: „It’s hard when papers and magazines only focus on extremes … for a change let’s focus on the common similarities.“ Here you can listen  to his very educating song:

The common similarities between Jews and Arabs

This video makes me think of how it would be if the media headlines were completely different.
Media has such a big impact on how people see the world. It’s no wonder that people are upset, when the news are constantly showing acts of violence, injustice, horror… play an never ending loop on how bad the situation is. And what’s the most crucial, is that they blame „the other side“. By looking out who is guilty, there is no room of discussing change.

Just imagine a daily news would sound like that. Do you feel the difference?

Jerusalem. At a demonstration sunday evening a cleaved group of arab activists throw stones at cars. According to the Palestinian news agency MAAN three of them were arrested later by the Palestinian Authority. Spokesman Nabil Abu Rudeineh expressed his sorrow for the incident and said they will press charges: „We will continue to denounce extremists and do whatever it takes to restore the quiet to Jerusalem.“ Also Palestinian President Mahmoud Abbas named the occurrence “a violent, criminal and despicable incident… aimed at hurting and undermining the established peaceful coexistence of Arabs and Jews.“

The protest has been held by israeli and palestinian citizens against the arrest of Salim Yaver and his sister Ayasha. The siblings are held in administrative detention and claim to have done nothing illegal. Sivan Weizman, spokeswoman for the Israeli Prison Authority, promised to clarify the situation as quick as possible. Israel’s democratic foundations forbid arbitrary imprisonment. „If the Authorities made a mistake we are deeply sorry and the siblings will get financial compensation.“ Right now a sovereign court inspects the case.

Well, i know this sounds like a fairy tale. But i hope it helps illustrating my idea.